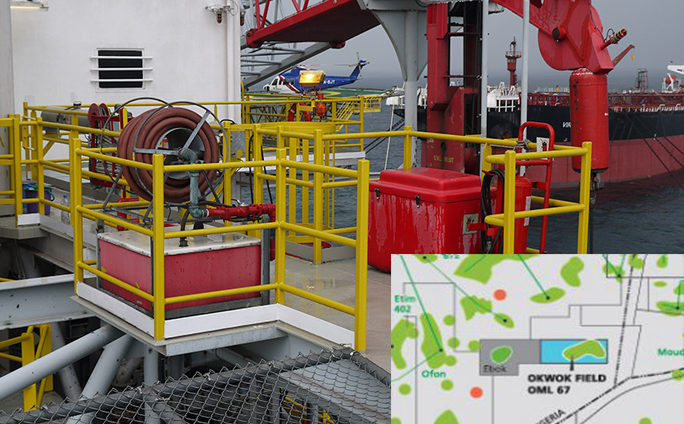 In 2001, ExxonMobil contributed the Okwok field to Nigeria’s Marginal Field Program, which was established by the Nigerian government to encourage greater indigenous participation in the oil and gas sector. Pursuant to this program, Oriental Resources completed a farm-in agreement for Okwok with Mobil and the Nigerian National Petroleum Corporation (“NNPC”) in June 2006. Addax subsequently entered into a Joint Venture Agreement (“JVA”) with Oriental for an interest in the Okwok field. The field benefits from the Nigerian Marginal Field Fiscal and Tax Regime.

Okwok is an undeveloped oil field located in southern OML 67, 50 km offshore in 130 feet of water and 15 km East of the Oriental-operated Ebok development. The field was discovered by the ExxonMobil/NNPC JV in 1967 (Okwok-1), and two subsequent appraisal wells were drilled in 1968 (Okwok-2 and Okwok-3) but not production tested. The wells encountered oil in the LD1 and D2 series of reservoirs (also proved to be oil bearing and under development at the Ebok field) with over 100 feet of oil pay logged in the Okwok-2 well at the D2 level plus several oil-bearing intervals in the LD1 of the Okwok-1 and Okwok-2 wells.

The JV drilled and evaluated ten appraisal wells in the broadly distributed Okwok field between 2007 and 2015. Early efforts concentrated on appraising D2 reservoir in FB2 in the crestal area of the field.  Wells Okwok 4, 4ST, 09, 9ST, 11 and 11ST were drilled to delineate and appraise this complex reservoir with good porosity and high-API crude oil. The drilling campaign established a good understanding of the reservoir volume, quality and sand architecture.

In 2012, the partnership completed processing of the 348 km2 Ocean Bottom Cable 3D seismic survey that was acquired over the whole Ebok/Okwok/OML 115 area in late 2011.  The new data was used to design an appraisal program to determine the optimal development plan for the field. In late 2012, the JV spudded the Okwok-10 appraisal well to confirm oil potential within a previously undrilled fault block. The well reached a total measured depth of 4,117 feet and successfully encountered 72 feet of net oil pay in the D1 reservoirs that are in production at the nearby Ebok field. The Partners subsequently drilled a planned side-track well into a lightly explored deeper fault block and encountered a further 89 feet of net oil pay in the LD1 series sands.

The results of the appraisal drilling campaign led the partnership to submit a Field Development Plan (FDP) in late 2013, and the plan was approved by Nigeria’s Department of Petroleum Resources in January 2014. In early 2015, Oriental installed a wellhead jacket and drilled the first development well in the field, in anticipation of the production facilities. The Okwok-13 well was drilled as a horizontal producer into the LD1 series sands in the Fault Block 3 (FB3) area tested by the OKW-10ST.  It encountered the targeted LD1-B Lower with a gross section of 1,856’ containing 1,525’ of net oil pay. Reservoir porosity and permeability were excellent, and the well was completed and tested. A maximum oil rate of 5,400 bopd was recorded and a high well productivity index was established.

The results of the early development drilling were integrated with increased knowledge of similar reservoirs form Ebok field to optimize the field development strategy and Oriental Energy Resources filed a revised FDP in December of 2017.

The revised Okwok field FDP includes the installation of a 16-slot wellhead platform (WHP) over the previously installed wellhead jacket. This platform will have capacity for up to 32 wells via the use of splitter wellheads. The platform will be connected to an adjacent, spread-moored FPSO designed to handle throughput of 40,000 barrels of oil, 15 million standard cubic feet of gas and 60,000 barrels of water per day. The treated crude stored in the FPSO is to be transferred to tandem-moored tankers for export from the field.

The first phase of the Okwok development targets an estimated 39 million barrels of 2P oil reserves in three reservoirs in the central and western portion of the field. Twelve oil producers and five water injectors will be drilled. A gas injector/producer well may be required for managing the gas resources in the field. Drilling is contemplated to commence in 2019, ahead of commissioning of the facilities and First Oil.

At a future time, further development of the eastern and southeastern portion of the field, including the previously appraised D2 reservoir, may be possible through the installation of a second platform.